skip to main | skip to sidebar

I attended a change management seminar this week. When the instructor first asked us if we liked change or not, my initial reaction was to recoil - ick, change. And, then I realized that my distaste for change was really related to some recent stuff at work - but in reality, I like change. I LOVE change. A WHOLE lot of change.

From the moment I first left home for college to my first job (call it 5 years for round numbers), I moved 13 times (that just happens to be my lucky number). Now, part of those moves were necessitated by college scholarship (thank you, AT&T). But, part of them were just me. I really didn't mind the changes in scenery.

When hubby & I decided to get married, we both changed jobs, I sold my house, we moved 150 miles, had a wedding, and bought land to build a house - all within a few weeks.

After building our home in Kansas City and studying for a year to get my professional engineering degree, I was ready for more change - it started with our decision that we were ready to "try" to have kids, and I decided to go for my MBA as well. I took my GRE & got accepted to grad school. The day after I attended the orientation session, I found out I was pregnant (little did I know that "try" would equal one month of "effort"). The day after registering for classes, I found out it was twins.

With twins, your whole life is change. And with their premature birth, we had more change than we knew what to do with for a long, long time. (Which meant an abrupt halt to the MBA program.) But, the kids are school age now...we're in a nice routine. School, summer camps, homework - life is moving along nicely.

I've enrolled for an MBA program here in Colorado. I start prerequisites June 6th. It will take me at least slightly over 2 years - maybe closer to 3 years if I take any summer or fall breaks.

I know change is not Randy's favorite thing...I just keep telling him, at least I'm not looking to change him.
at 8:54 PM 1 comment:

Sometimes, getting it out can be beneficial. I'll hope that this is the case here.

We spent last week in Iowa. This year, Iowa hasn't been as fun as it normally is. My mom had a pressure sore at the end of 2009 - the cushion in her wheelchair "broke" - the fancy shmancy cushion that keeps her from getting pressure sores. She coddled it along while she waited for the new one to arrive. And, when the new one arrived - only three days later - the damage had been done.

For a few months, they tried to get it to heal unsuccessfully - and eventually she landed in the hospital with a pretty serious infection. Pressure sore wounds + infections + paralysis are just not good, folks.

She ended up having surgery to try to heal the wound - but that proved unsuccessful because the radiation from last year's uterine cancer caused the skin in that area to not heal correctly. She's now been home for about 12 weeks with a wound vac on - and it is SLOWLY healing. The doctor estimated another 6 - 8 weeks on Monday. On bedrest. The poor lady hasn't been out of bed since around Christmas. SIGH.

So, the trips to Iowa now include a lot of stuff. Going shopping (ok, so that isn't bad), dreaming up projects for mom to do, kicking dad's behind into order, cleaning - a lot of "stuff". Thankfully, the kids are old enough that they can pretty much take care of themselves and they will spend a lot of time "hanging" in grandma's room watching TV, playing on her computer, doing crafts, running around her room & being generally cute. In the evenings when a lot of the stuff is done, I talk with mom.

I learned on this trip that she signed a DNR on her last hospital admission - and she wants us to abide by it. She doesn't want to become any more handicapped than she already is - she couldn't handle the effects of a stroke or losing her ability to use her arms.

I took a leadership class in April. I think a lot of it goes back to being one of the only women in the organization. Funny how aggressive men are "driven" and aggressive women are "bitchy". The class was great, though, and I learned so much.

Part of the class is working with a one-on-one leadership coach. Mine was a psychologist as a well as a former business-woman. She nailed it pretty quickly for me. I suffer from Post-Traumatic Stress. Gee, I wonder why?

I know I still haven't processed everything that happened back in 2004 - how could you really be expected to do that? My kids were born at 27 weeks on April 30th - I haven't met a preemie mom yet who deals with that guilt very effectively. 3 weeks + 2 days later, my parents were in a head-on collision (drunk driver) at 2 p.m in the afternoon on their return home from seeing my kids. I was pretty convinced at that time I was going to lose them. I remember getting the phone call, finally reaching the Iowa State Parol & hearing about the accident, and literally curling up into a ball in the corner of a closet. I dealt with that beautifully, huh?

For about a week, I dealt with 3 hospitals as we tried to assess both parents conditions and was still dealing with the itty bitty babies in the NICU (all 4 family members were in ICUs). Then, they transferred Tanner to another NICU in another Hospital because of his liver issues. Tanner had 2 sugeries - mom had more than I can remember.

Things returned to "managable" on August 23, 2004 - Tanner had been diagnosed with Biliary Atresia (and he would need a liver transplant in February 2005), mom was home (in a wheelchair), and Morgan & my dad were home.

So how come after six years, I still hav a hard time processing it all? How does hearing that my mom signed a DNR bring back that old guilt / anger?

Morgan has a birthmark. Ironically, it didn't show up for quite awhile. Born at 27 weeks, the birthmark showed up about 3 weeks before her actual due date. We honestly thought for awhile, that it was a result of my dad holding her while he had a halo on (we though he had hit her head on the metal apparatus around the halo). Finally, our pediatrician told us what it was.

You can kind of see it here - partially hidden under her bangs just above her right eye.

And you can definitely see it in this pic - the pre-hair pic:

So, the problem really isn't the birthmark. I love the birthmark - I love that we have a story that it wasn't there at birth but showed up closer to her due date. I love kissing her birthmark. It's a piece of her, and I think it's beautiful.

But...that isn't how she feels. It makes me so sad that at 5 years old, she is so concerned about her appearance, her hair, what she wears. How, at five years old, can she be so concerned about this little birthmark? She insists on having bangs to cover her birthmark - and will never let me pull them back in case someone else might see the birthmark.

I've talked myself blue in the face about inner beauty vs. outer beauty, that the birthmark is beautiful and it's part of who she is - she isn't buying it.

How do you convey this information to your children?
at 8:55 PM 6 comments:

Tomorrow is really going to suck

I've been "off" work since 12/18 - that makes 16 total days including 6 weekend days. It was forced, mandatory vacation - and as such, I didn't actually not work all of those days. I had to spend about 1 - 2 days in the office setting up interviews for this week and helping finalize the year. But - still, most of that time was M-I-N-E.

We had a great time doing mostly family stuff. We had a wonderful holiday, saw Princess & the Frog, rode the "train" to downtown, met up with some friends, and I even got to do some scrapbooking. We made it to the gym about 12 of those 16 days - so, all in all, it was a good break.

But, after staying up late and sleeping in until late morning, tomorrow is really going to suck.
at 7:51 PM No comments:

When I first became pregnant in 2003, I never would have guessed that I would have twins - let alone that they would be born 13 weeks and 2 days early (at 26 weeks, 5 days gestation). There are no words to explain the guilt that I felt - and still feel - for not being able to carry them longer. I don't think I have met a preemie mom who didn't feel that guilt.

Never would I have anticipated the IVs, medicines, procedures, tests, care, and cost that would go into sustaining these tiny, fragile children. Tanner & Morgan were born weighing 995 grams and 999 grams (2 lb 3.1 oz and 2 lb 3.3 oz respectively). Tanner was 13.25" long and Morgan was 12.75" long. Just slight over a foot - they litterally could fit into the palm of your hand.

Twin pregnancies have a higher risk for early delivery. Even so, I had an ideal pregnancy until about 25 weeks. At that time, I began having contractions - that led to their eventual delivery at nearly 27 weeks. I received steroid shots in those 2 weeks between complications and delivery - shots that helped develop their lungs prior to their birth. Because of this, neither child was every on a ventilator after their birth (nearly unheard of for this gestational age).

(Tanner & Morgan about 2-1/2 weeks old - my first time holding them both together.)

Both children received days of treatment under bili lamps to help control jaundice (Tanner's liver problems were unrelated to his premature birth), Vitamin A shots to help with their vision, Caffeine to prevent low heart rates, og and ng tubes for feeding, and various breathing assistance (nasal cannula or CPAP).

Morgan spent 55 days in the NICU (and returned for a hospitalization within a few weeks).

We are so very grateful for the medical advances and God's grace that allowed Tanner and Morgan to survive the early birth. But, as a guilt-ridden mom, I don't want another mother to have to watch their child suffer through weeks of medical treatments in plastic boxes - when the child should have spent those days / weeks / months in the womb. It's why every year, Randy & I walk for March of Dimes.

Never would I have imaged such an early entrance for my two children, let alone what perfect being they would be. 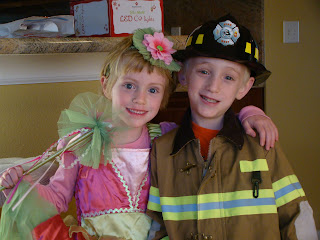 Halloween also marks Tanner & Morgan's 1/2 birthday. So, in order to help me keep track (and because I won't remember to write it anywhere else) - here are there latest stats: